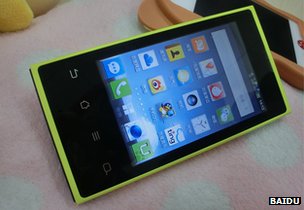 Baidu has announced the launch of its first smartphone this month. The smart phone, produced by Foxconn, will enter the mass, low-cost market in China.
The model – Changhong H5018 is powered by Baidu’s very-own mobile operating system – Cloud.
This represents a significant move for Baidu, to secure a presence in the rapidly expanding mobile industry in China, which has the largest amount of smartphone usersÂ in the world.

The H5018 will be the first mobile device toÂ use Baidu’s Cloud Smart terminal platform, the phoneÂ Â will come with 100GB ofÂ cloudÂ storageÂ -on Wangpan, the Chinese equivalent of Dropbox and Google Drive.

Mobile customers in China currently have a choice between low-cost handsets made by firms such as ZTE Corp, Huawei Technologies, HTC,Â Xiaomi & Lenovo.

“It’s a terrific market opportunity for us, and Baidu is constantly adjusting, understanding what users are interested in,” Mr Kuo told BBC News.

“The new handset is integrated with the cloud – and with our 100GB offering, I think that no one will be able to match that.”

Earlier this year, Baidu said it had to develop a stronger presence in China’s rapidly expanding mobile space, and this latest move is a clear indication that Baidu is repositioning itself as a platform-focussed company, supported by Mr Kuo’s statement:-